By Brandon Raphael, President of the Macon Bacon

I know what you’re thinking.

The only catches are the ones being made on the baseball diamond.

When you come to a Macon Bacon game with a 5-game plan, you get dinner on us.

There’s no extra cost. It all comes with the price of a ticket.

We also have giant ceiling fans in the seating bowl which keep you cool on those warm Georgia nights.

With this 5-game plan, you get a manageable number of games.

Order now and come hungry,  because we are ready to put on a show for you at Luther Williams Field. Buy a 5-Game Plan
Great, affordable family fun. Very inclusive, even to the littlest Bacon fans! Our 6 and 3 year olds LOVE Kevin and get so excited for game days! At every game you attend on this 5-game plan, you’ll have access to all the all-beef hot dogs, hamburgers, cheeseburgers, veggie burgers, chicken sandwiches, chips, cookies, ice cold Coca-Cola products and bottled water you want.

All-you-can-eat is not available with single-game tickets.

When you purchase a 5-game plan, you’ll get one free Macon Bacon t-shirt for every seat.

This isn’t a shirt you can buy in the team store. It’s a limited edition t-shirt created only for our plan holders.

We don’t water down our 5-game plan. These are our five BEST games of the season.

It includes all weekend dates and Opening Night, which is one of the hardest tickets to get in middle Georgia.

Opening Night (Friday, May 27) is always a fun event. Our stands will be packed for the first game of the year. We’ll cap off the night with a HUGE fireworks show.

We’ll have a concert on Southern Rock Night (Saturday, June 18) at the ballpark, which celebrates the rich music tradition in the city of Macon.

Star Wars Night (Saturday, July 16) speaks for itself. It’s a fan favorite, as the Bacon will wear Star Wars-themed jerseys that will be auctioned off during the game. Plus, we’ll have your favorite Star Wars characters to interact with at the stadium.

Fan Appreciation Night (Friday, July 29) will conclude our season. Last year, we brought 50 fans onto the field to throw out the ceremonial first pitch and kick off the festivities.

Three of the five games on this plan will end with a HUGE fireworks show beyond the center-field wall.

Fans will be treated to postgame fireworks on May 27 (Opening Night), July 1 and July 29 (Fan Appreciation Night).

This outstanding benefit allows you to exchange your five games and truly make it a plan that fits your schedule.

Can’t make it to a game? No worries. You can exchange your tickets before or after the game for another date that works for you. Just give us a call and we will get you new tickets to the game of your choice, based on availability.

All 5-game plan holders are seated in our reserve section of the seating bowl. To keep you cool, we have four MASSIVE ceiling fans that circulate the air to keep the breeze moving on those warm Georgia nights.

Our concessions grilling limits and our desire to have short lines allows us to sell no more than 1,000 of these ticket packages per game. This all-inclusive plan is not available for the single-game buyer.

We make it easy to pay for your Macon Bacon tickets. You have the choice to spread your payments out over the remaining months until April 15, 2022 via credit card.

Your ticket representative can help find what works best for you.

Buy a 5-Game Plan
Local affordable fun! The players interact with the fans and kids which my son LOVES! 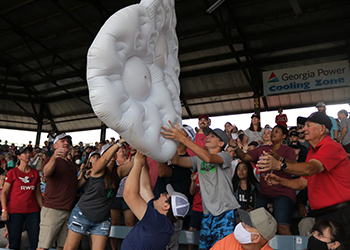 You can visit our team office at Luther Williams Field to purchase tickets in-person.

The team office and The Pork Shop are open from 8 a.m. to 5 p.m., Monday-Friday during the entire year.

Do you want more information about the Macon Bacon 5-game plan?

Fill out the following form and a ticket representative will reach out to you.